TWO PEOPLE WERE SHOT OUTSIDE NSW POLICE HEADQUARTERS IN PARRAMATTA!!!

Suddenly at 4.30 p.m., an armed man started shooting outside NSW police headquarters in Parramatta, resulting to the death of 2 people.  Immediately after the shots the guardians reacted and killed the murderer.  After this incident there was panic in the area and the witnesses said that the armed man was from Middle East and that he was wearing black clothes.  They also said that there was blood everywhere and white sheets that were covering the dead people.  The police confirmed the incident that took place outside their HQ and asked from people to avoid the area.  Around the scene of murder there are many policemen and also a helicopter is flying around the area to prevent any other murder.  We must also say that the incident took place near a daycare centre where the children till now 6.30p.m. remain locked to the daycare to protect them, because the one dead body is at the doorstep of daycare!  According to unconfirmed information the police had warning of the attack through intelligence services, but they didn’t know the time.

Previous article « PAOK HAD A DRAW AGAINST DORTMUND (VIDEO) 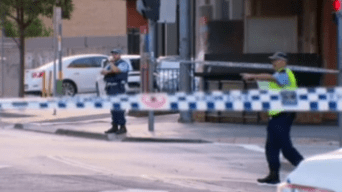