Our beloved actor, Stathis Psaltis, lost the battle with cancer and passed away on Friday 2.25pm

The medical announcement is the above:

«Today, at 2.25pm our beloved actor, Stathis Psaltis, passed away.  He came at the hospital “Ayios Savvas” at  14/03/2017 where he was diagnosed  with cancer.  From 16/04/2017 he was hospitalized at the Intensive Care Unit where he died.  Our deepest condolences to his family».

Stathis Psaltis was giving a battle with cancer for about a month, but the doctors found that besides the lung, he had cancer in many other vital organs.

Stathis Psaltis (Greek: Στάθης Ψάλτης; born February 27, 1951 in Velo, Korinthia – deceased April 21, 2017) was a Greek cinema, TV and theatre comedian. He was mostly famous for starring in many 1980s films.

He was born in Velo Korinthias where he lived during his childhood until the age of 11, when his family moved to Aigaleo.

He studied at the acting school of Kostis Michailidis and finished the law school of the university of Athens. 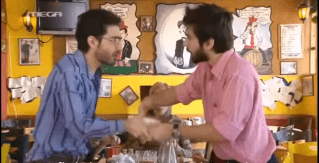