Task Force Fugitive detectives are assisting NSW Police in the search for two men wanted in connection with a firearms incident near Wagga Wagga on Friday 16 October.

Task Force Fugitive joined the search after a stolen Toyota Landcruiser tray utility, bearing NSW registration plates BV70WP was sighted being re-fuelled at a service station in Euroa around 6.30pm on Monday 19 October.

Two men were sighted with the vehicle and detectives believe they are Gino and Mark Stocco, a father and son from Queensland, who are also wanted for a range of alleged criminal offences in a number of other Australian states.

The vehicle is described as a 2013 white Toyota Landcruiser tray utility with distinctive white bull bars and NSW registration plates BV70WP. There is a distinctive green esky and two blue chairs in the tray.

The utility is equipped with a 145 litre fuel tank which means it can travel up to 800km between refills.

The men paid for their fuel purchase before leaving the area in an unknown direction.

In the most current police photos available, Gino Stocco is depicted as having grey hair, a grey beard and brown eyes and is 57-years-old.

The most recent police photo of Mark Stocco depicts him as having dark brown, medium-length hair, a dark brown beard and brown eyes and he is 35-years-old. When sighted last night Mark was clean shaven and was wearing a cap.

The men are believed to have contacts in many parts of Victoria and investigators are appealing for the community to remain vigilant and report any sightings of the distinctive Toyota Landcruiser, which may be displaying different registration plates.

Police are advising the community not to approach the men as they are considered armed and dangerous, anyone who sights the men or the vehicle is urged to contact Triple Zero (000) immediately. 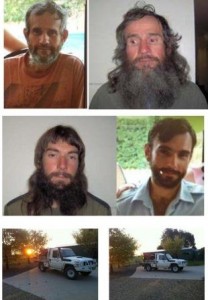 Anyone with any other information is urged to contact Crime Stoppers on 1800 333 000 or make a confidential report at www.crimestoppersvic.com.au

Next article Arrest over Hallam deceptions »