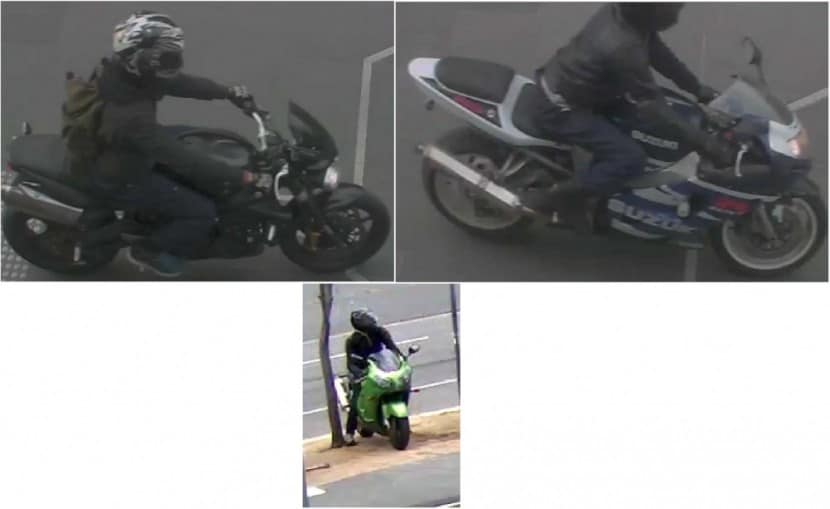 Officers from Melbourne Divisional Response Unit are investigating the circumstances surrounding the theft of two motorcycles.

Police have been told a green 2001 Kawasaki ZX12R motorcycle was parked in St Kilda Rd, Melbourne on Monday 17 August.

Investigators have been told that around 2.15pm two thieves on a black Triumph Street Triple motorcycle approached the Kawasaki and the pillion passenger used a hammer and large screwdriver to force the ignition.

Both offenders then rode the motorcycles from the scene.

It is believed the same duo stole a second motorcycle in St Kilda Rd at 3pm on Wednesday 19 August, again using a hammer and screwdriver to force the ignition on a blue and white 2003 Suzuki GSXR600 motorcycle.

The rider is described as wearing a black, white and grey motorcycle helmet and black ‘Nike’ sneakers with blue laces, red logo and white soles.

The passenger is described as wearing a black motorcycle helmet, black jacket and blue jeans with white shoes.

Police have released images of the stolen Suzuki and Kawasaki, aswell as the black Triumph being ridden by one of the thieves.

Anyone with any information is urged to contact Crime Stoppers on 1800 333 000 or submit a confidential crime report at www.crimestoppersvic.com.au